When Kate shared the following story with us we knew we had to share it with you all. It’s easy to celebrate success but we don’t always reflect on the challenges. Kate’s story reminds us that obstacles can be overcome and that your child’s health is worth your persistence. Thanks Kate

My son, Shanon, has been attending Before & After Care and Summer Camp through the Westbrook, Maine Community Center since he was in Kindergarten (he’s going into 5th grade next year), and I have a history of being dissatisfied with their healthy eating/active living choices for the kids (TV first thing in the morning, Capri Sun “ice packs” so they have a treat when it melts, etc.) so I was thrilled when they became a Let’s Go! site at the beginning of the school year.  The Capri Suns went away and TVs were turned off among other things. However, there was still one thing that drove me batty- the very accessible Café in the Community Center that has all the chips, candy, and soda/energy drinks/bug juice that a child could want. 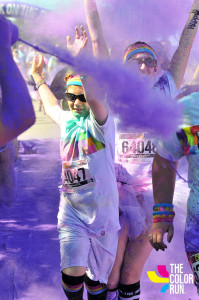 Kate and Shanon at the Color Run

You see, last year at summer camp, children were allowed to bring money to spend at the Café where they bought chips, candy, and sugary drinks for lunch.  This practice continued even after they became a Let’s Go! site (but only during vacation camps). So, in November of last year, I finally decided to reach out to the Children’s Program Coordinator at the Community Center and spoke to him about my concerns around their inconsistent policies.  I wanted to understand why, in the course of 1 week, children could be allowed to have candy and sugary drinks with their lunch during a vacation camp day and the very next day, a normal school day, these things weren’t allowed.  I was told that unfortunately, vacation & summer camps are different from the After School program and weren’t held to the same Let’s Go! standards.  Needless to say, I wasn’t happy with that answer- so I joined the Westbrook 21st CCLC Advisory Board, continued to ask questions, and push the importance of messaging consistency.

You can imagine my surprise (which inspired an impromptu dance in my dining room) when I reached page 6 of the Family Summer Camp Guide – not only did they hear my concerns; they found a way to incorporate their Let’s Go!  after school strategies into their non-Let’s Go! out-of-school program AND got the café on board.  Just plain AWESOME!!!